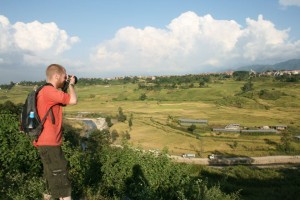 Students can participate in our weekend outing program that will be organized as per their timing and interests. It is to be duly noted that students will have to afford their individual expenses themselves. Generally, the program is 2 nights/3 days long at most. This program includes following events:

Pokhara is situated at an elevation of 915m above sea level and 200m west of Kathmandu, the capital city of Nepal. The rich ness of valley in pure natural beauty is indeed one of the main attractions to the visitors from all over the world. Just imagine the joy of observing the majestic Himalayas, three peaks above 8000m from an elevation of below 1000m within a very close aerial, distance. The valley is equally superb giving as they do elevated close-ups to the snowy peaks. The serenity of Phewa Lake and the magnificence summits like Machhapuchhre (Fishtail) (6977m) and the five peaks of Annapurna range rising behind it create an ambience of peace and magic.
Paragliding: 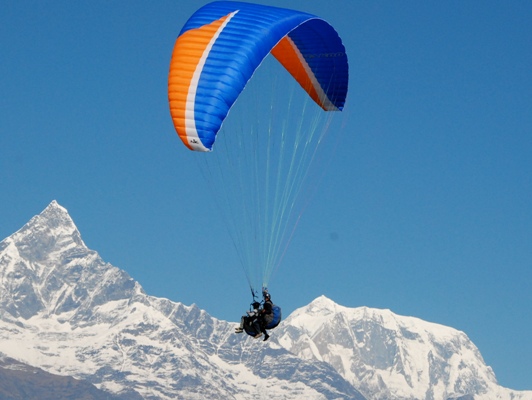 Pokhara, Lake Side in Nepal offers one of the most fantastic places in the world to international Paragliders. People come from all over the world to take advantage of the ideal jump off spots at Sarangkot at 1425m. From there you can catch a thermal and fly around the lake enjoy the view of Machapucre Fish Tall mountain. Fewa Lake below offers a safety net, with many landing spots to choose. Check out out Maps of local landing and take off spots and for the more advanced there are extended paragliding adventures, such as Lampus and beyond.
Jungle Safari:
The tropical jungles of Nepal’s Terai preserve some of the best wildlife habitats of South Asia. Some of the wildlife attractions of Nepal’s jungles include the rare one-horned rhinoceros, the elusive Royal Bengal tiger, snow leopard, red panda and musk deer. Jungle safaris can be enjoyed on elephant back or in jeeps at Chitwan National Park, Bardia National Park, Parsa Wildlife Reserve and Shuklaphanta Wildlife Reserve, all located in the Terai. The national parks provide a wide range of tourist facilities in and around the areas.
Rafting / Kayaking / Canoeing 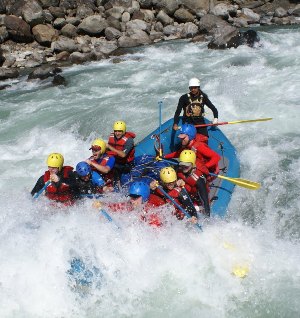 Nepal boasts some of the best whitewaters in the world, thanks to its mountainous steep terrain. What really makes a rafting trip worthwhile is the magnificent vistas of traditional houses on hillsides, terraced paddy fields, deep gorges, valleys and flat plains that you encounter on the way. While exploring the rivers, you can either go paddle rafting as a team or go kayaking and canoeing alone.The rapids are graded on a scale of one to six depending on their ferocity. Trips range from one or two days to two-week expeditions, and often combine some trekking to get to the remote rivers in the first place. Rafting trips are usually planned in the dry seasons from October through mid-December and March through early May.The Trishuli River (grade 3+) is the most popular among raftable rivers. Close to Kathmandu, the trip takes you down all the way to the Chitwan National Park. Other popular rivers include the Kali Gandaki (4-4+) near Pokhara, Bhote Koshi (4-5), Marshyangdi (4-5+), Karnali (4-5) and the Sun Koshi (4-5), which runs 270 km and requires 8-10 days.
Bungee jump: 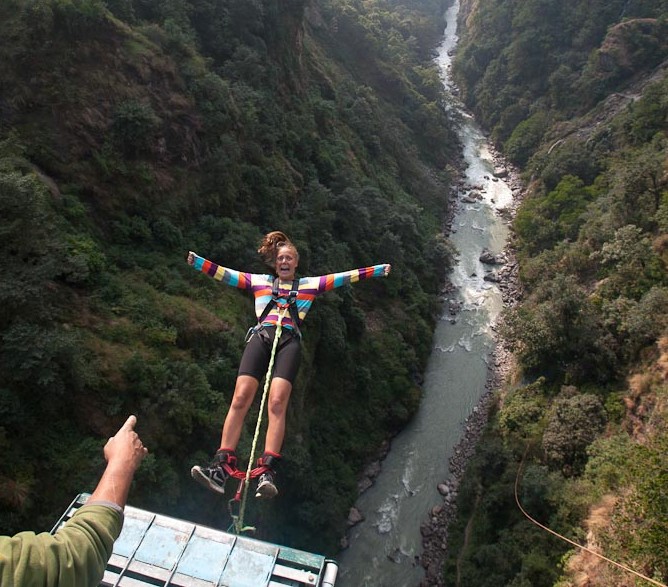 The ultimate thrill of a bungee jump can now be experienced in Nepal – 12 km from the Nepal-Tibet border, a three-hour bus ride from Kathmandu. The bungee jump was designed by one of New Zealand’s leading bungee consultants, and is operated by some of the most experienced jump masters in the business. The jump takes place from a 166 m wide steel suspension bridge that joins two sides of a deep valley over the raging Bhoti Kosi River. The place has spectacular scenery with dense forests covering the top of the cliff. One can overnight here and go rafting and rock climbing, too. Canyoning is basically a sport where you travel down canyons and waterfalls using a variety of techniques such as walking, scrambling, climbing, abseiling and swimming. It is one sport that will get you completely off the beaten track, but it does require quite a good level of fitness.
Rock Climbing 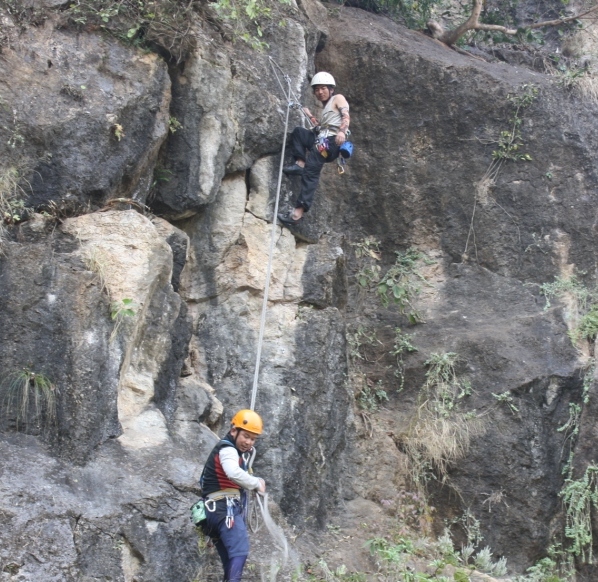 Rock climbing is a challenging sport for outdoor lovers.
Most of the areas for rock climbing
are situated towards the north of Kathmandu in the Nagarjun forest and Shivapuri National
Park.
Hence a trip to these places can be combined with hiking, bird watching, nature tours and other activities.
In Pokhara, an artificial climbing wall named after French alpinist Maurice Herzog, the first mountaineer ever to summit an 8,000 m peak – Annapurna I – in 1950, is open at the Mountaineering Museum. It is 23 m tall.
Mountain Flight: 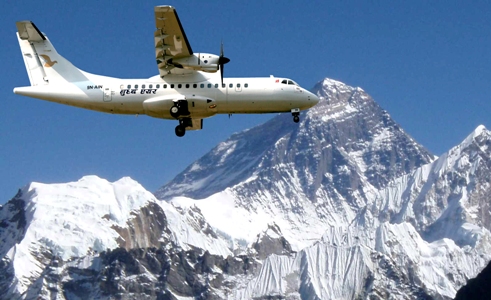 Mountain flights offer the luxurious option of a Himalayan experience. The one-hour mountain flight from Kathmandu takes one close to the highest peaks, including Mt. Everest.
During the flight, you get to see Gosaithan (also called Shisha Pangma), Dorje Lhakpa, Phurbi Chyachu, Choba Bhamare, Gaurishanker, Melungtse, Chugimago, Numbur, Karyolung, Cho-Oyu, Gyachungkang, Pumori, Nuptse and, of course, Everest. Mountain flights are offered by several airlines in the morning from the domestic airport in Kathmandu. Flights from Kathmandu reveal the Eastern Himalaya, while flights from Pokhara take you on a bird’s eye view of the Western
Himalaya.
Mountain Biking 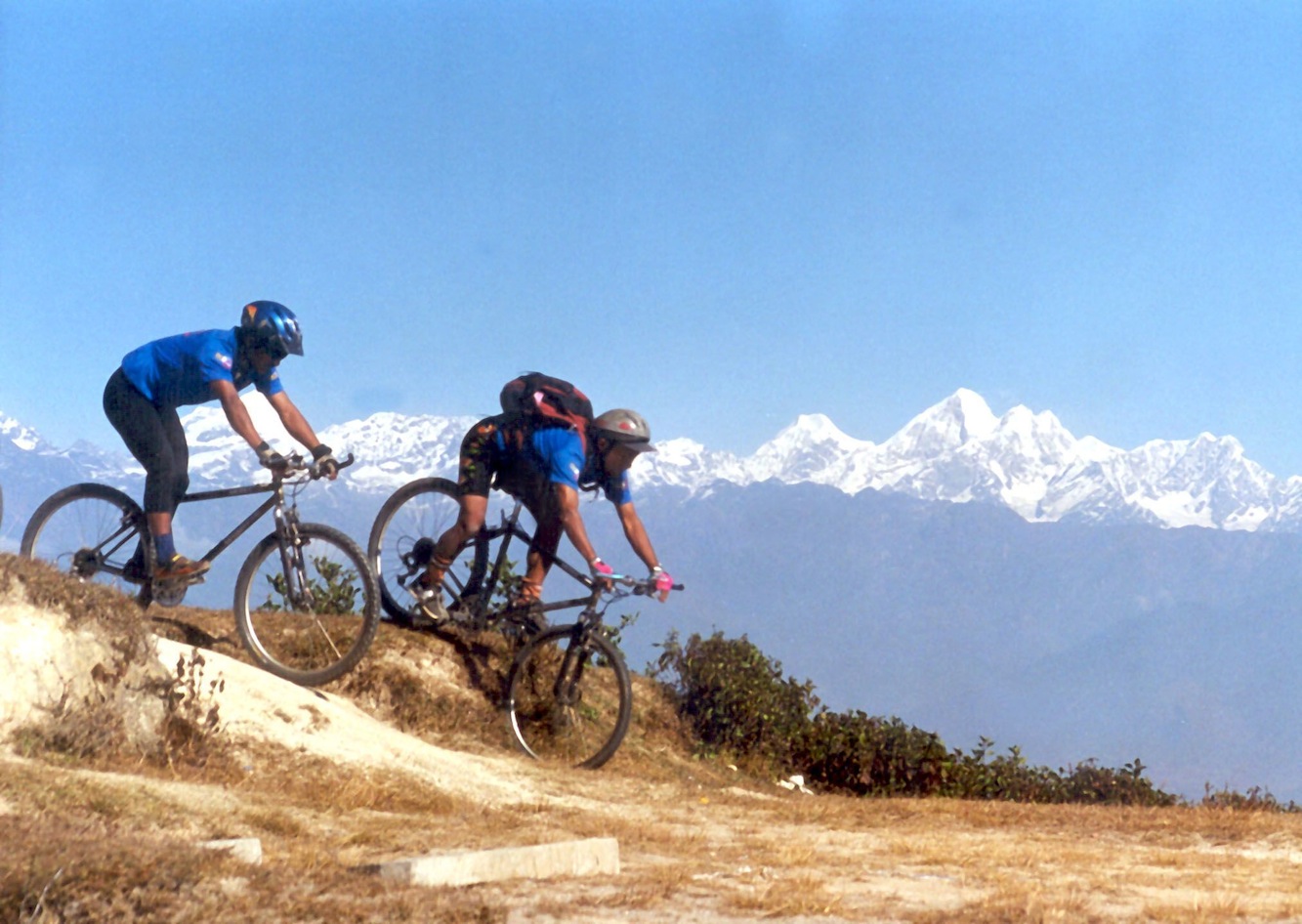 Nepal’s diverse terrain makes it one of the best for mountain biking.

Bike through the country and discover villages and small towns in the midst of rural serenity.

Time permitting, it is even possible to explore the entire length and breadth of the country on a mountain bike. Bikes can be hired in Kathmandu and Pokhara.