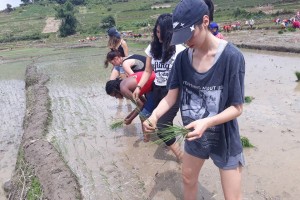 Travelling and going for a hike to a new place has always been fun and refreshing. We had planned for a hike a week earlier. We were all hoping for good and favorable weather as the weather nowadays is fickle. Luckily that day it turned out to be decent. We had planned to reach the city bus park by 10. But due to some delay we were there at 10:30. Though it was Saturday the bus park was even more crowded than usual. The sun was shining and our faces were gleaming in the sun. We were standing there waiting for the bus. As we knew that buses in Kathmandu are always crowded, we had planned to go to Pharping but we couldn’t get the bus so we shifted our hike to Bungamati. 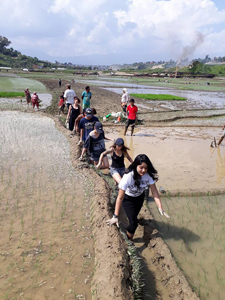 We started our journey from Ratnapark in a microbus. We were seated comfortably and after 30-45 minutes we reached Bhaisepati. We were all starving so we headed to a restaurant to fulfill our hunger. After we had ordered food we took some pictures of places nearby the restaurant. We were welcomed and served well in that restaurant. Everyone liked the food. After we were full we headed to a field where farmers were busy planting the rice. We all were excited to work in a field. When the farmers saw us they welcomed us and invited us in the field. Happily, we went taking off our shoes to plant rice. Boys helped in collecting mud while we planted rice. The women working there guided us in rice plantation and we did accordingly. Later, boys also joined us. It was a new experience working there so we had fun and were happy. The farmers were happy as well. They offered local beer to us. Everyone tasted it and enjoyed the taste of it. We were pleased to see their affection, care and helpful responses towards us. After we were done we came out of the field and we cleaned our muddy bodies with water from a tunnel. Then we thanked all farmers for being so kind and helpful and left the place. 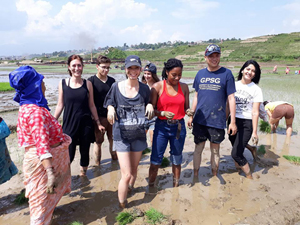 We had planned to visit the leprosy village. So, we went there. On the way we saw the earthquake affected area and we also visited the Machhindranath temple that was almost destroyed by earthquake. We captured some pictures and kept walking following the steady path. Finally, we reached the leprosy health center. It was Saturday so unfortunately we couldn’t go inside and talk to people around there. We only visited the place and took some photos. The sun was shining dimly. It was turning dark slowly, so we went to catch bus to return back home. It was really difficult to find a bus there. The buses were only few in numbers and were all crowded. So, we started walking from there. On the way we caught a jeep and returned back. It was tough but fun to travel on that funky jeep.

Overall, far away from the hustle and bustle of the city we had a rejuvenating Saturday. We all enjoyed the journey and had a majestic experience. This was a pleasant day, one that will always be remembered.