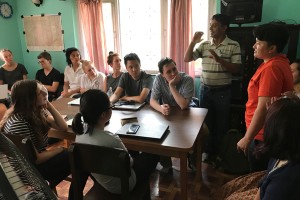 Internship Nepal keeps on arranging several effectual interaction programs with various successful and heroic personalities of Nepal. This past Thursday we had invited one of the most elegant and inspiring ladies of this era Ms. Laxmi Ghalan, who is a lesbian Human Rights defender at social work. She currently works in Mitini Nepal, a non-government organization which works for social justice and equality of lesbians. Gathered in our interaction room, we were eagerly waiting for her to come. Most of us were busy sharing each other’s hopes towards the interaction program. Ms. Laxmi arrived on time and so did three other ladies in her team, all equally bold and smart. We warmly welcomed them into the house.

Lakshmi Ghalan started off with a brief introduction of herself; with a speech that reflected the pivotal works of Mitini Nepal. Next to her was Ms. Avantika, helping Ms. Lakshmi in translating her speech to English. First she began with shedding light upon the history of Mitini Nepal, her experience of working in Mitini Nepal and several difficulties and struggles that they faced and tackled. She also explained the past situation of our society and people’s perspective towards lesbians giving a very beautiful example of Rajani and Prem Kumari‘s love story. She proclaimed that Mitini Nepal was isolated from and hated by other social organizations at the time. But with an endless support from “Tewa”, a non- social organization, they kept on struggling and now have come up with remarkable achievements. Also she made us clear how people’s perspective towards lesbians is now inclined to the positive side in the present context compared to the past.  Mitini Nepal has done a lot of struggle fighting for the rights of the lesbians, establishing LBT people in the society with social acceptance, solving LBT women’s issues, problems and many more. After hearing her opinions, another amazing lady Sarita KC who’s a secretary and trainer at Mitini Nepal, followed with her short and sweet speech. She made us aware of how Mitini Nepal had actively helped the victims of earthquake with relief programs during the devastating time. It was interesting to know how effective their “community kitchen” campaign had become during that time. She made some spectacular judgments on how they could win people’s heart and change their thoughts towards lesbians in that period. The end of their speeches was followed by queries and curiosities of our energetic students. After our thirst for the answers was quenched, everybody was served drinks to quench the other more natural form of thirst. We took some group photos with our guests. The whole photo session proved to be an ecstatic one as well.

This brief interaction program was affluent, enthusiastic and all in all awe-inspiring. Organizations like Mitini Nepal have made the country proud through visible social reformations. Ms. Laxmi and co. says the doors to their world are open for our team anytime of the day. Their eye-opening gesture also seems to have generated some solid eagerness in our students. We are thankful to the team of Mitini Nepal for kindly sparing their valuable time for us.