When we greeted Bungamati once again

The day began with all the excitement that Kathmandu has to offer; with the most imperfect weather complimenting the trip that we all looked forward to. A group of twelve, we packed our bags without any further ado. A pristine herd of students at Internship Nepal and we knew this was going to be memorable without even setting out. And as it has been made clear so many times in the past, plans at Internship Nepal hardly go haywire.

A mid summer day started with a hope of experiencing something new. As the day progressed, the sun started to heat up however we were not set back by some abysmal factors like the infamously crowded Nepalese buses, noise, pollution, bumpy graveled roads and so on and so forth. But with all the enthusiasm we had we all arrived to our destination in no time although it was a hectic two hours of road. We got to the Pharping Monastery at around 12:45.

Whether you call it a nature’s cradle or heaven’s bassinet, everything seems to fall for good when you come to a place so alarmingly beautiful. I would hear from the students later on- the monastery and its setup, the architecture and the ambience turned out to be pragmatically true as they had been told. The place just lightens up a lost soul if there were any. The depth of pleasure and the organic sound of silence. Even though after blabbering these phrases one knows they’ll still believe that not all the feelings can be expressed by the words, the ignorance is just worth it.

Our journey stretched further as we all headed towards another spot after snapping some shots of ourselves; not to forget the scenic views of beautiful Pharping Monastery and the lush landscapes that engulfed the area. Moving onto another nearby locale, we stroke our noses at the Pharping Hydropower Construction (located in Pharping of Kathmandu district nearly 12k.m.south from the heart of the city) which students were thrilled to find out was the first hydropower station of Nepal and more broadly the second oldest hydropower station in Asia. The total capacity of the power station is 500K.W. 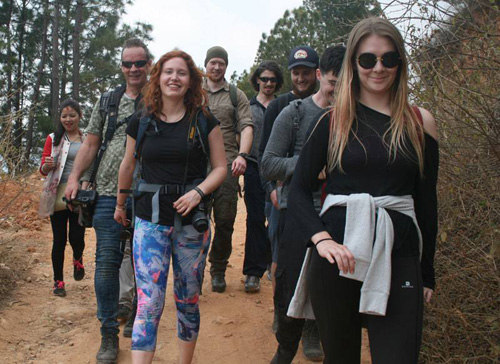 After a long, hostile but resurrecting breathe outside the premises of the station, we marched towards the traditional, artistically lavish town of Bungamati. The very city was deemed the most devastated among others around the valley by the horrible Mega earthquake of 2072. Famous for their craftsmanship in wood carving, people have still made efforts in preservation of quite a few historical monuments despite the destruction. Most notable were some stone wells which were constructed for water use in the ancient period, still in use.  After collecting the historical worth of the city our group moved up to our last destination. Almost everyone was low on energy, out of hunger perhaps

We stopped by at a traditionally exuberant place to serve ourselves some lunch at about 3:30 pm.

Two hours of chitchat during lunch along with the tasty food re-energized the troop and this was absolutely necessary. We decided to call it a day as the sun seemed desperate to set. The group took a bus and departed to the residence with our sweet memories and good company of all in a whole day. In Jefferey Dean Morgan’s words, “This was a productive damn day!” Good tour, good people around, good food and a healthy interaction. What more do you ask for in this holy country? So proud to be a Nepali. Peace!