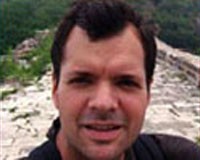 Having been to the Kingdom of Nepal as a tourist just eight months ago, I thought I had a good idea of what to expect. Rickshaws, busy streets, sacred cows, holy sites, and all the things that I found enchanting the first time around. But from the moment I stepped off the plane, I was in for something very different. To experience Kathmandu not as a tourist, but as a photojournalist with Internship Nepal, is something much better than I could have ever guessed.

To begin with, I wouldn’t have trusted Internship Nepal had its chairman, Nardev Pandey, not advertised on the website of the National Press Photographers Association. That gave him instant credibility. Lauren, his liaison from America, gave me another boost of confidence by answering all of my questions to the fullest. I wanted to know everything before I left: Where will I live? What’s the job like? Where will I eat? Will there be toilet paper? Once I was satisfied with her replies, it was my love of Nepal that compelled me to go. I knew from experience that I had little to fear from the ongoing civil war. But I was still concerned about making a major commitment so far away, and with people who I was just getting to know.

If you’ve read this far, then you may be having the same questions and doubts that I had only a couple of months ago. Maybe you’re apprehensive about the political situation in Nepal. Or maybe it’s just the toilet paper. Whatever the case may be, let me tell you a bit about my life here; about why I’m having the best time of my life, despite living in the poorest, most politically backward country in Asia.

I live in the home of Nardev and Sila Pandey. It’s three-storey apartment building on Anamnagar, a busy street in downtown Kathmandu. My room is clean and cozy, just big enough for one. The shared ‘bathroom’ is nothing more than an outhouse, situated a few steps from the front door. It’s a bit stinky and has only cold water, but Kathmandu is warm even in February, so it gets the job done.

I never lack for food, as Sila is a talented and prolific cook. She stuffs me constantly with savoury Nepali meals, with as much or as little spice as I like. Seconds are mandatory, and if I don’t say ‘pugyo’ (“enough!”) about six times in a forceful voice, I am likely to end up with third and fourth helpings on my plate – not necessarily a bad thing. Nardev and Sila have two adorable, if rambunctious kids living here. To them I am “kaka,” which sounds terrible in English, but in Nepali it means “uncle”. They are cute enough to land roles in a Bollywood film.

About the safety situation. Despite the ongoing civil war that has claimed over ten thousand lives in the last ten years, and despite some dire warnings from the U.S. Consulate, I have found most of Nepal to be safe for foreigners. When there is an outbreak of violence, it is usually outside the city lines, and it is almost always targeted at government facilities, not civilians. Religious fundamentalism is not a problem in the world’s only Hindu kingdom. If your idea of Nepal is something like Iraq, think again. Kathmandu is a far cry from Baghdad, or even Tehran for that matter; westerners are not the focus of anyone’s hatred here. And crime isn’t a problem at all. I feel at least as safe in Kathmandu as I did in my previous homes in India, Los Angeles and New York.

Far from being the focus of discontent, visitors to Nepal are cherished by the local population. An oft-repeated saying in Nepal is “The guest is a god” – which is an exaggeration, to be sure, but only a slight one. From the moment I left the airport, I’ve been subject to the kind of generousity and hospitality for which Nepal is rightly famous. Kind strangers, eager to befriend a foreigner, are always offering to drink chiya with me in the public square. When I say “Mero desh America ho” (I’m from America), I can see a warm, misty glow wash over their faces. To the overwhelming majority of Nepalis, the Western world remains a beacon of freedom. The America of Nepal’s imagination is the immigrant’s dream of a country where the roads are paved with rupees and the beaches are crowded with bikini-clad Hilton sisters. Of course my country is a far cry from a Bollywood director’s vision ! of Shangri-La. But in comparison to Nepal, whose political and economic situation is on perpetual life-support, these myths about America are both understandable and not altogether false.

Further rewards come to the traveller who makes an effort to be involved in the culture. I do my best to learn and to speak as much Nepali as I can. Even when I mispronounce a word or two – which is usually the case – locals like to see that a foreigner is not quite as foreign as they’d first thought. Another mark in my favor is my ability to sing an embarrassingly large number of Bollywood tunes. Needless to say, this makes me a big hit on long, bumpy bus rides through the Himalayas.

This odd combination of civil war and civility make present-day Nepal an ideal place for an adventurous photojournalist like myself. On the one hand, it’s a safe place for a foreigner to be. But if you’re looking for trouble, it is there for the taking. Just this week I’ve photographed three political protests for the Kathmandu Post and Nepalhumanrightsnews.com. One of the demonstrations turned violent, with the police firing water cannons and thrashing civilians with bamboo sticks. I documented this protest willingly and at my own risk. It was a good thing that I had some help. A knowledgable guide from the Post was at my side at all times, translating Nepali for me, and when necessary, telling me when and where to run!

This is part of my personality; a touch of danger is the garam masala of my professional life. But if that’s not your cup of chiya, if you’re understandably terrified of political violence, then it’s easy to avoid these kinds of situations. How can Nepal be both safe and dangerous at the same time? Strange as it may sound, violence in Nepal tends to be scheduled in the form of organized protests. The newspapers and local population knows when and where things will turn sour well before it happens. Knowing this, you can easily arrange to be somewhere else when the time comes. While I’m running away from bursts of tear gas in the city streets, many of my co-workers are attending football games and interviewing movie stars downtown. War or peace - the choice will be yours to make.

Such is life in Nepal. Nor does anyone expect things to get much worse. This is the way Nepal has been for the last fifteen years, and it’s the way life is likely to continue. Most everyone is used to it by now, and we all continue our lives as normally as possible.

When I’m not shooting political events, I’m photographing Nepal’s surreal blend of Hindu and Buddhist culture. My images are published every day and one of my favorite photos has already made the cover of the Post, which is read by 40,000 people each day. I work hard here – nine-hour days and six days a week are the norm – but the office is relaxed. My coworkers are highly talented and far more courageos than I am. All of us are competitive in a friendly way. I learn a lot from them, and I enjoy my time there. The photolab at the Post is one of the happiest rooms in the city because everyone is having too much fun, and we all know it.

On my days off, there is no end of things to do. Usually I hop on Nardev’s motorcycle, and he whisks me off to the movie theater. Sometimes we visit to ancient Hindu holy shrines and Buddhist monasteries. Or we go shopping for wood carvings at the local bazaar. I’m also looking forward to visiting Pokhara. I want to trek in the Himalayas, with up-close views of some of the world’s highest peaks. As you can tell, Nepal is such a dreary and boring place!

Understand that while I’m having the time of my life here, your mileage may vary. If you’ve never been to Nepal or India, you are in for some serious culture shock. Everything is done differently here, and I have had to relearn a lot of life’s basics from scratch. Nepal leaves a strong impression on visitors, for better or worse. Even if you’re not the type to get homesick, I promise that you will miss toilet paper and high-speed internet. Luxuries like that don’t exist. That’s why I strongly recommend that you arrive here early if you can, in order to get the feel of things.

Also I think that a woman’s experience will be different and, truth be told, not quite as good. Although Internship Nepal treats all of its interns well, Nepal itself is a man’s world. It is not a medeival country like Afghanistan, but something closer to a Victorian sensibility. Women are protected from society, and it can lead to isolation from some of the better parts of local culture. That said, I do see a lot of foreign women travelling alone here, and I tip my topi to them. I hope they’re enjoing Nepal as much as I do.

That sums up my experience here so far. Every day here with Internship Nepal has been a thrill and a challenge. This country brings out the best in me, and I know that I will curse the day that my visa expires and I am forced to leave this exciting country. Returning home to Los Angeles will probably be a disappointment, just like it was last time. Maybe I’ll go to India and visit Kashmir, instead. I hear it looks a lot like Nepal.
February 18, 2006
For Comment And Question: www.toddkrainin.com