At the Lap of Sankhu and its Periphery 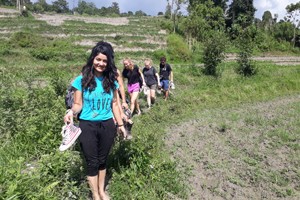 Where is the fun in life if we don’t even spare some time to take a short break, go gallivanting and fall in love with the nature? It was as if our recent hike was a paradigm of the above thought since after almost two weeks of sheer work magnitude, we came up with a vivid plan to set out on a hike to Sankhu. The place is an ancient town located 17km to the North-East of Kathmandu. The tentative itinerary for the day suggested that we would be visiting the entire Sankhu, Sankharapur Municipality, Salinadi and Bajrayogini Temple.

Excited as we were, we gathered at the bus station and took a bus that would lead us straight up to Sankhu. It was not the very first time we took our students to this beautiful place, embellished by nature. The ride wasn’t as smooth as we were in for a bumpy couple of hours. We departed with high hopes from the very day and the climate was perfectly cool as ever. 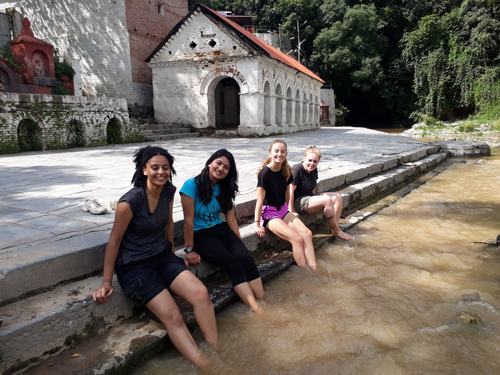 Two hours into the journey, we would finally arrive at our destination. But it was rather the start of the journey, really. Getting down from the bus, we bought ourselves some water to keep us hydrated, few candies and boxes of juice to offer the farmers who were busy in rice plantation and who would later let us join in the field. Complete exploration of the city of Sankhu was followed by lunch at 1; escaping the scorching heat we headed into a delightfully secluded restaurant to rummage through our food.

Our next stop was the infamously holy Hindu river “Salinadi”. The name comes from the belief that Goddess Parvati had bathed in the very holy site during her meditation months. The sound of hymns formed an absolutely melodious tune and perfectly justified the serenity of the place. We found ourselves dipping our feet in the river for a while, just like so many pilgrims. Salinadi, moreover is popular for being synonymous with Hindus’ “Swasthaani Puja”, which is a month-long ritual observed by reading “Swasthani Bratakatha” (a story that depicts the holiness of the relationship between Lord Shiva and Goddess Parvati). After a thorough skim of the place and the majestic temple, with our students taking some fantastic pictures of the place, we bid goodbye to Salinadi. Next was another of the famous temples of the Kathmandu periphery -“Bajrayogini Temple”. Built way up in the hill, it was almost a nuisance to get up there with our bellies full. And equally notorious were the monkeys there, whose tales of mischief would later be the talk of the day. But by the sight of the premises around the temple, walking up almost a hundred flights of stairs was definitely no regret. We greeted Bajrayogini; the temple’s sacredness being just as integral as its altitude. With the dusk approaching and clouds hovering over us, it was best that we caught the bus and returned back. 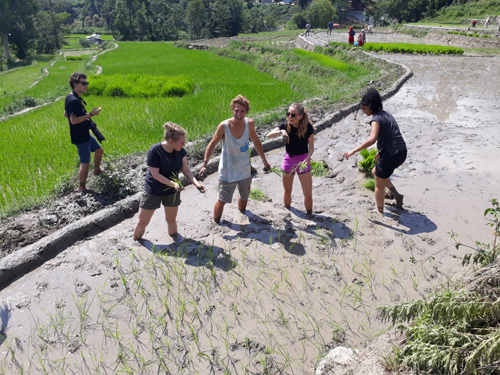 At the end of the day, we looked back and sought after the thought of going back to Sankhu again sometime as there could be no place else that offers so much of enthusiasm and holiness, both at once.