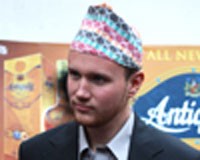 When I graduated from the University of Alaska Anchorage in December of 2007, I realized that I had yet to do a single internship. Looking online, one of the first sites I found was Internship Nepal; but seeming too good to be true and questioning its authenticity, I moved on. Upon further research, I was unable to find any internships for post graduates such as myself and thus I returned to Internship Nepal. After inquiring with some of the previous interns from the program via email and along with communicating with Nardev himself, my skepticism was easily pushed aside and I signed up.
When I first arrived in Kathmandu, one of the first things I thought was, "Maybe five months was too long." But as I was welcomed into the Pandey home all worries simply melted away. When I first started work I was at an economics magazine called "New Business Age Nepal" I was part of a team put together to help put a sister youth magazine, "Infotiser" that had since been discontinued due to the cost of paper, on the internet. However, through no fault of "New Business Age" the project had to be pushed back indefinitely and so I was let go from that position and was without a job.
Nardev, quick to respond to my needs as always, soon sent me over to a human rights group called SAHARA, who had just recently put in a request for a photographer, which happened to be my primary interest when I came here anyway. After finding out that I would be in Kathmandu for five months, SAHARA Group decided that the project was possible and they let me on the team. Here I will mention that the longer you stay in Kathmandu the better. More volunteer options will be available to you because organizations will be able to invest more in you and thus able to get more projects done; as well as the fact that there is no such thing as too much time in Kathmandu. But anyway, together, my boss Saumitra and I designed a plan to document the life of street children here in Kathmandu and to host an exhibition near the end of my stay, to showcase the work and create awareness of the situation.
Uncertain as to how to begin such a daunting task, the likes of which I have never done before, I got in contact with one of Nardev's friends who runs a mobile food unit for underprivileged people as well as street kids. By following him around Kathmandu on a bicycle, I was exposed to areas where the street children hung out and thus could begin work of my own. For the first month I would walk to these areas without my camera and would simply observe; watching them and making my presence known. Eventually they started to come over to me and talk with me, and despite their poor English and my non-existent Nepali we somehow still managed to make it work.
As the kids began to trust me more I started taking pictures and it was around this time that a fellow intern from Internship Nepal was brought onto the SAHARA team to help with a movie documentary for the exhibition. Through Nardev's friend of a friend, we were able to get a hold of a camera as well as access to an editing studio. I cannot emphasize enough how crucial Nardev's contacts are to this program. After a while, both the movie and the collection of photos were finished and it was time to prepare for the exhibition.
We held the event at a nearby restaurant and had 80 to 100 attendees. It was inaugurated by Ms. Bindra Hada Bhattrai, the Secretary of Ministry of Women Children and Social Welfare in Nepal, and even some of the press came to cover the event. The exhibition stayed up for three days and was taken down. The next step is for SAHARA to purchase their own mobile display boards and take the whole show out to rural Nepal, where most of the street children come from. Educating the children as well as their families on the situation in the streets, and thus hopefully they will be less likely to jump to the streets of Kathmandu as a first solution to their problems.
I cannot think of a better place to do an internship than in Kathmandu. This place is a volunteer's playground for teachers, journalists, photographers, medical students and any other number of options this program has to offer; there are so many stories and so much work to be done that you will never get bored. This along with the fact that this nation is still growing and developing every day means that the fruit of your labors are quickly manifested before your eyes and are always rewarding. My only word of advice, aside from the longer you stay here the better, is patience. There are many things in Nepal that are not as convenient or reliable as some may have become accustomed to, and this along with the numerous cultural differences and misunderstandings can be quite challenging. However, if you just take it all in and accept it, I know that volunteering in Nepal will be an unforgettable as well as life altering choice.
E-mail: spostrowski@gmail.com